What are the major challenges that emission intensive sectors face in order to transition towards decarbonization? What technical and organizational innovations can they rely on? What are the key actors involved in the decarbonization process? Who is set to lose, and who is set to benefit, from this major restructuring of EU economies?

Such questions, amongst others, were addressed during six Stakeholder Workshops organized at the CMCC Foundation (Euro-Mediterranean Center on Climate Change) offices in Venice on May 3rd and 4th, 2017, as part of the INNOPATHS project. These six workshops, focused on six sectors of particular importance to the low-carbon transition – power, buildings, transport, agriculture, industry and Information and Communication Technologies (ICT) and allowed for the exchange and discussion of views from invited sector stakeholders on the key actors, technologies and policies of relevance in each sector, and the enablers and barriers to the energy transition.

Discussions in the workshops were very lively. All workshops concluded that a successful decarbonization of the EU economy depends on the presence of well-designed, stable policy instruments, tailored for sector-specific needs and appropriate across diverse EU member states. A key requirement for this is the continual engagement of and dialogue between the policy-making community, technology developers, researchers and the European citizenry. It was noted that, in some cases, institutions and policy instruments were successful in incentivizing innovation through rules, laws and incentive mechanisms. In others, however, they slowed down and sometimes blocked the innovation process for example with the bureaucratic burden, effectively making the decarbonization process more difficult.

In the Power Sector, stakeholders agreed that there is a broad consensus on the key generation technologies that will play a role in the transition (e.g., solar PV and gas as a transition mid-term option), although the specific combination and trajectory over time will vary by member state. The real game changers, however, will be the ‘enabling’ technologies – particularly electricity storage – which have the potential to turn the current energy system on its head, by allowing the system to move beyond instantaneous matching of generation and demand. The development of new institutions, and particularly new business models, to support the deployment of these technologies is crucial.

The Buildings Sector faces tremendous challenges, including retrofitting the existing stock for energy efficiency and integrating ICT technologies. Buildings owners and occupants are often unaware of the benefits that could be achieved by investing to increase energy efficiency, and lack of access to finance to pay for high up-front costs with long payback times (over 20 years) compounds the issue. Co-ordination issues in multi-ownership and multi-occupancy buildings are also strong. Government policy must play a crucial role. To address these challenges, it was suggested that it is necessary to foster the retrofitting and the deployment of renewable energy in entire districts, and, to strictly enforce regulation, to invest in making the public aware of the benefits of retrofitting and energy efficiency, and to ensure that the construction industry is better skilled at delivering energy efficiency options.

In the Industry Sector it was argued that much greater potential for energy efficiency gains would come from less rather than more energy-intensive sectors. Indeed, due to the large operating cost energy consumption represents, energy-intensive industries (such as chemicals, steel, cement, and glass) are already incentivized to be as energy efficient as possible. Conversely, in less energy-intensive sectors, such incentives are less strong.  In these sectors, such as food processing, energy efficiency is often overlooked as a potential source of competitive advantage. For this reason, it is crucial that the government help firms identify and accept energy saving opportunities.

Reducing emissions in the Transport Sector was described as a ‘battleground’, with transport effectively being ‘the problem child of climate policy’ due it its diversity: freight, aviation, public and private transport. In this sector the development of new, low carbon business models will be crucial, but other aspects related to social and cultural perceptions (e.g. status effects) also play an extremely important role. Stakeholders disagreed on the most important level of governance – EU, national, or local – for achieving low-carbon transport.

Stakeholders agreed that ICT solutions will be core to the decarbonization of the sectors discussed above. A crucial concern is the amount energy that ICTs themselves consume. However, many of the barriers in this sector are social rather than technical. For example, the potentially overwhelming choice of ICT hardware and applications on the market, and what services these technologies perform and how, may confuse consumers as to which combination is suitable for them, and prevent them making any choice at all.

A significant challenge in the Agriculture Sector is that the principal GHG emissions are Nitrous Oxide (N2O) and Methane (CH4) produced by biological processes, rather than carbon dioxide (CO2) from fossil fuel combustion. There are therefore limits to the reduction of such emissions whilst demand for agricultural produce remains high and grows. A shift in human diet towards vegetarianism is unlikely to become an important driver of emissions reduction given the current and expected future trend of global meat consumption.

These workshops represent the beginning of what will be a continuous process of stakeholder ‘co-design’ embedded in the INNOPATHS project. While the process will be a complex one, continuous engagement and a connection between different actors – from EU policy makers to individual citizens –  will help ensure that crucial aspects of the low-carbon transition are not overlooked, and are appropriately considered in achieving the core aim of INNOPATHS – the development of generating new, state-of-the-art low-carbon transition pathways for the European Union. 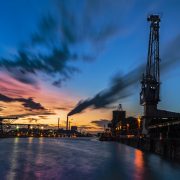