The costs of offshore wind are falling dramatically. Several European countries have now agreed to buy power from offshore wind farms at costs which challenge the notion that renewable energy must be heavily subsidised to survive.

What has caused these rapid cost reductions? Can we expect the costs of offshore wind contracts to remain at these relatively low levels, or even to reduce further?

The cost reductions are likely to have had a few contributing factors, several of which can be seen optimistically as factors that will continue to keep costs low in the future.

One such factor is an innovation relating to policy design. The payment level received by offshore wind projects is now increasingly decided not by governments, but by requesting companies to bid in for the contract, declaring the price at which they would be prepared to deliver it. Such auction-based systems allow governments to choose the lowest cost of the now revealed bids. It seems plausible that the move towards auction-based allocation systems may have helped to drive down prices by introducing price competition into the bidding process.

Technological improvement is an important factor for enabling such cost reductions. There has been a clear trend towards larger and more efficient turbines which can deliver greater amounts of energy, increasing return on investment, thereby lowering costs. The trend is set to continue, with one major company expecting the turbines they will use in 2024 to be double the current size.

However, other factors that could explain the recent low bids may give a less clear grounds for optimism that the low prices are here to stay.

It is possible that companies may currently be bidding low for strategic reasons. For some companies, a lower return may be considered worthwhile, at the present time, for the benefit of maintaining their project supply chains. If subsidies in some previous rounds were overly generous, as some have suggested, it might be that this is currently enabling some flexibility on the balance sheet for low bids. If this is part of the explanation, such strategic bidding could not be maintained in the long run.

Auction design can also incentivise companies to put in bids lower than they would ideally accept, if they believe that another project will bid in higher and set the price received by all selected bids. However, if such a strategy backfires then a company could win a contract but at a price at which it is impossible to deliver the project – sometimes called “the winner’s curse”.

Another important factor likely to be lowering costs at the present time is the relatively low cost of financing. Investors have increased familiarity with offshore wind, and the long term contracts being issued by governments help to manage uncertainty, enabling lenders to lend at lower rates of interest. However, there are also important external conditions – interest rates in general are exceptionally low at the moment. As interest rates are likely to rise again in the future, it is possible that this could add to the cost of future projects.

Costs of projects are also strongly affected by site conditions, such as distance from shore and depth of water. There is a limited number of sites close to shore and in shallow water, and if future sites are in deeper water and further from shore this could drive up costs.

Of course, the news of extremely low prices for offshore wind contracts is to be welcomed. However, rather than becoming too focussed on zero-subsidy auctions as ends in themselves, we should continue to pay attention to making policies that look robust across all market conditions: long-term policy stability; careful attention to auction design; allocating transmission and balancing costs to support rational network development and incentivise innovations in storage and flexibility; and supporting and coordinating innovation chains.

Vulnerability and resistance in the United Kingdom's smart meter transition 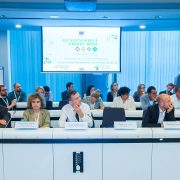